We got a puppy a couple of weeks ago. The stars aligned, and we welcomed Delta, a brindle boxer, into our home. We had been planning it for some time.  Buttercup missed having someone to play with since we lost her older brother, Buddy. The humans missed having a puppy to cuddle (and completely blocked out the joys of potty training). 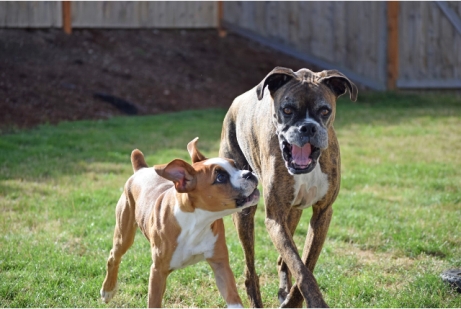 Buttercup is the sweetest pup.  And that is how I have always seen her: as a pup. But she is not a pup. She is 4 years old, which is middle aged for a Boxer.  Still, she was playful and cuddly like a puppy.  She still is.  The weirdest thing happened, though, when we brought home Delta.  As soon as we set Delta next to her on the floor, Buttercup grew into this brawny, muscled, big dog. It was like watching Bruce Banner turn into the Hulk (but without all the anger and not green). Suddenly, Buttercup looked like a dog. All the puppy just disappeared.

I realized that I had been seeing Buttercup as things were. She was still the puppy who played with our big dog. Even when we lost him, she stayed a puppy in my mind. That is until we had someone to compare her to. Enter Delta. Next to Delta, Buttercup appears full grown. The fact is that she has been full grown for a long time.

Buttercup acts like a mature dog. She quickly took on the role as leader of the pack schooling the little girl. Though they play constantly, Buttercup is putting on a show. She knows Delta is a little puppy with an oversized image of her own might. Just like Buddy did for her when she was a pup, Buttercup lets Delta nip and bite, but only pretends to do that herself. Buttercup knows she’s the adult.

This made me realize how we think we see something or someone so clearly, when the reality is that we see things and people through our memories and through comparisons. Maybe we can’t see something clearly until we have that comparison. Could we know what tears of joy are without experiencing tears of pain? Could we know loneliness without feeling kinship? Could we understand safety without experiencing fear? And so, it was with Buttercup. With nothing to compare her to, Buttercup remained a playful puppy in my eyes. Compared to a wiggly, twelve-pounder with twice as much skin as she needs, Buttercup became a musclebound sentinel.

This has been a season of comparisons revealing what is true, starting with the pace of life. I used to see life as a bit of a tornado that I would get swept up in. That was until I was forced to stay home for 8 weeks straight.  I can see that there are a lot of things I chose to do, but always thought I had to do.  In fact, once I surrendered and accepted this situation, I let go of so many busy things I did.  I can’t even remember what they all were. They must have required a lot of gasoline, though.  I also remembered what meaningful feels like. I knew meaningful before this. But if you are spinning in a tornado, it’s hard to distinguish between the things that are just racing by you that you should let pass, and the things that are racing by that you should reach out with all of your might and hold onto like your very life depends on it.

It sounds dramatic but the truth is that these are the tiniest moments in life. Maybe that is why we cannot see that they are so meaningful without a comparison.  Like sitting on the back patio, drinking coffee and talking to my husband as we watch Canine Etiquette 101 and Tug o’ War 201. Or really checking in with my team to make sure that they are not too overwhelmed with managing school and work from home. Laughing with girlfriends over Zoom as we have our monthly dinner party.

What I can and cannot do right now has illuminated what I value. It has slowed the tornado to a brisk breeze, allowing those heavy things that plague my To Do List to fall to the ground, and allowing me to hug the things that lift my spirit. It has separated the boredom remedies from the soul feeders. As things pick up again, I hope that I will examine each thing I add back in and try to see it for what it truly is. I am guessing there are a few things that I have not been able to do in the last 8 weeks, that I will chose not to do in the future. I will hold them up in comparison. I will replace them with the things that matter more. 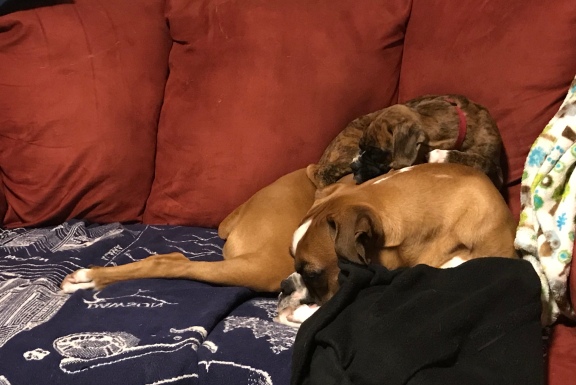 12 thoughts on “The Truth – In Comparison”