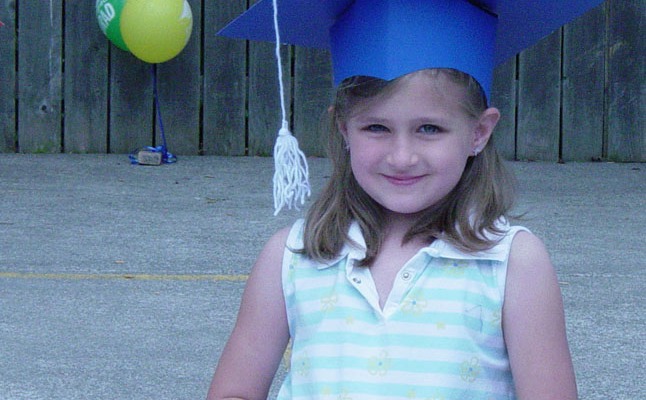 Thirty-eight months ago,
I wanted a time machine so I could pop back to her first day of kindergarten and feel her tiny, baby-soft hands hugging my neck. Mwaa! Her kiss on my cheek before she skipped off to meet Mrs. Bean.

Thirty-six months ago,
I wanted a flat tire so we would have to stop. Stop the silence fueled by the realization that one third of us would not be making the trip back. Stop the ponderosa pines whizzing by and the impending descent to the Columbia. I wanted to sit on the side of the road, my husband cursing the cheap factory jack and me praising my lucky stars for sharp object carelessly placed, and wait until her innate wit found the humor in our scene so that I could memorize her voice, imprint her laughter.

Thirty-one months ago,
I wanted a magical street sweeper—the kind that slips down the streets before dawn, brushing away the broken glass and lost objects, leaving behind a clear path so she could travel forward even veering onto the shoulder safely when needed.

Twenty-eight months ago,
I wanted one of those human-sized gerbil balls so she could keep moving forward, 360° protection from all the obstacles we could never have imagined. The microscopic virus swept across the planet, closing dorms, emptying stadiums, turning labs into demos and classes into TV shows, flattening the world until most human interaction became two dimensional.

Twenty-three months ago,
I (briefly) wanted a slew of sons to carry the mattress, boxes, and furniture to the U-Haul and then up the narrow stairs to her new home. Mostly, I needed grace for my relief that she was ready to resume college life on the east side of the mountains. I would miss her, of course, but not as much as I would miss her fierce independence and determination which were being threatened by viral limbo.

Seventeen months ago,
I stopped dreading video calls (life on Zoom having fatigued me to looking at my own face) because I could see the joy in her face when she shared her news of work and school. I saw with my own ever-worrying mother’s eyes that she was strong, and safe, and happy, and healthy. I could feel her passion for her chosen field. I wish I could have etched those moments in my memory—the day she called after her first day of coaching to tell me she was meant to do this job. All she learned at the ACSM conference and her new goal to study Human Performance in graduate school.

Thirteen months ago,
I knew she had it all figured out or at least as much as any one of us has. I knew she would land on her feet nine times out of ten. On that tenth one, she would push herself back up, brush herself off, and stand tall. I knew she found her home.

Six months ago,
I was in awe of her courage to pass on the sure thing, the safe thing, and commit to her dreams. Though I jealously wished I had been the one to talk her off the ledge of her “existential crisis”, I was grateful that she had a wise professor who did.

Last night,
sitting around the table with our family and friends,
celebrating this milestone,
I realized that I didn’t need time machines or magical street sweepers. I didn’t need grace for hard feelings or a photographic memory. This is another leg in the long journey of life and love I get to share with my daughter. Though never simple, all of it is enduring and magical.
I got to hold her hand.
Then, I had to stand aside.
Now, I get to sit beside her.

Officially hit the 60% mark on Roadside Sisters this morning. Big shoutout to the Early Birds who create an energized writing space on Zoom every morning at 0500.
Happy Writing Prompt Wednesday everyone!