I get a little nostalgic at Christmastime.  I suppose I am not alone in that. Christmas is such a magical season. It brings back bright and twinkling memories of people and places long gone.  I miss my Father-in-law most at Christmastime.  My father-in-law loved having Christmas morning with his granddaughter.  We would travel to his house on Christmas Eve and spend the night just so that he could see her face on Christmas morning.  He made a huge production of putting out cookies and milk for Santa Claus.  He had a special plate just for that night that he put on a table next to his chair in case Santa needed a rest. He would let her pick out the cookies. For her troubles, she would eat a couple and insist that he join her.  My father-in-law waited so long for her. I would like to say patiently but it would be a lie.  He wanted a grandbaby from the time I first met him, I think.  When she finally came along, he was the best kind of grandpa. You know the ones.  They get down on the floor ignoring the roar of their creaky knees.  They hide drawers of candy because they love to hear the squeals of delight and feel those reckless hugs.  They can be talked into any mischief by doe-eyes and butterfly kisses.  They will walk hunched over for miles just to be able to hold those tiny fingers as they explore their old world through their grandbaby’s new eyes.  They know that in the potentially 42,048,000 minutes in a lifetime, this one minute right now is the only one that truly matters.   That was my father in law. I was so happy that my baby was his special kid.  I had that with my grandpa. I knew he would not be around forever, but I also knew the memories of being loved so deeply and unconditionally would last her a lifetime.

They got in quite a lot of mischief over the years.  One time she even talked him into a water fight in grandma’s kitchen having discovered that the faucet was actually a hose. For a time after that he was barred from unsupervised babysitting for fear she would talk him into buying a motorcycle and heading down the coast. Believe me, when she aimed those baby blues at him, he lost all reason. He would do anything just so see her smile. 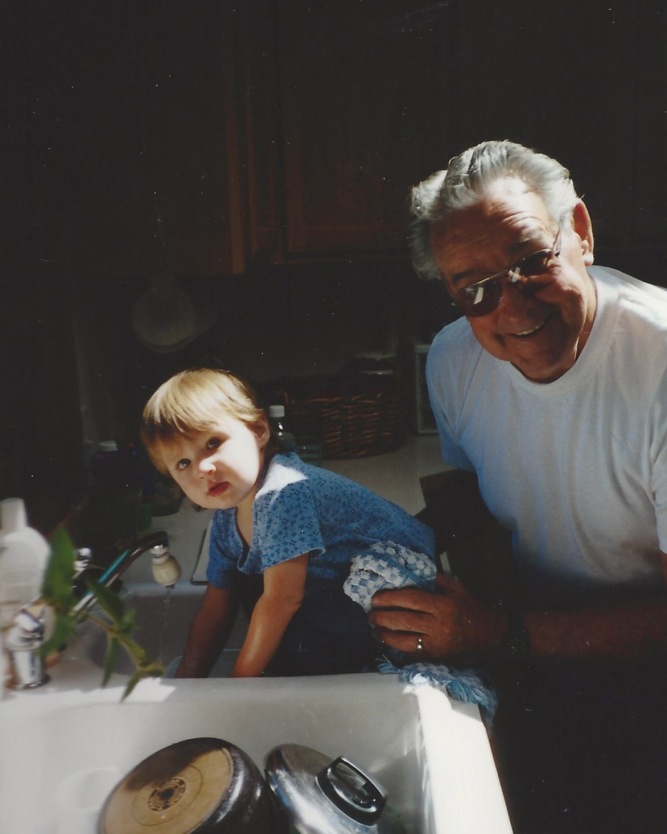 Caught in the Act – The Fateful Faucet Incident of 2003

One year, I went alone to mass on Christmas Eve leaving her, secure in the fact that she would be safe with her father, grandma and grandpa.  I naively thought that at least one of those adults would be impervious to her wily ways.  When I returned, there was a somber mood in the house.  “What’s wrong?”, I asked.

“Somebody?” I asked incredulously.  I wasn’t even there when it had happened, and I knew “somebody” didn’t do it.  I was sure I knew the ‘body’ that did.  I briefly wondered how she even ended up with glue in the first place but, even at the ripe old age of 4, she could have charmed them all out of their car keys.

Sheepishly he replied, “She says the cat did it.”

“Seriously?!” I wasn’t sure if I was more annoyed at her lying or their inability to get her to admit she was lying.

I called her to my side. “Who spilled glue on the table?”

“Grandpa did,” she stated firmly.  I looked up and was met by two pairs of wide eyes signaling their amazement that she had taken it up a notch.  I turned to my father-in-law, who was putting a superhuman effort into not breaking out in laughter, “Did you spill glue on the table?”

It took a moment for him to compose himself and I was grateful that he understood the gravity of the situation.  Laughing at this moment would have launched many more exasperating moments.

“Um, No. I did not spill glue on the table,” he replied in his most serious voice.

I looked her in the eye and said, “Grandpa says he did not spill the glue. I don’t think Grandpa would lie to us. Do you?”

She didn’t bother responding to that.  Instead, dismissing the other adults as possible suspects, she turned on the only other living being, “The cat did it.”  I had to dismiss the adults as they were now all holding back their laughter.

“Sweetie, the cat does not have opposable thumbs, so I think we can safely rule out the cat,” I stated, hoping she would come clean faced with this undisputable evidence clearing the poor cat.
“Well,” she started (and I groaned), “I don’t know about disposable thumbs, but the cat did it.”

It was time to bring out the big guns.  “Sweetie, do you know what mama does for a living? I am a high school principal. Believe me, I get kids to tell me the truth who’ve done far worse things that spilling glue on a table. You are not even a challenge.  I want you to sit here and when you are ready to tell me the truth about what happened, you let me know.” I walked away. While outwardly I was resolute and confident, inwardly I was a tornado of emotion.  She was lying! She would not admit it. Parenting is so hard.

In the end, I was right. It took her all of three minutes to come clean.  With tears in her eyes, I hugged her and reminded her that it is not OK to lie.  That lying about it is far worse than spilling glue on a table. I also told her that she needed to make things right, especially with her Grandpa after throwing him under the proverbial bus.  She clung to my legs, sniffling. I could tell she was afraid to take that first step.  “Go on. Tell him you are sorry for saying he did it. He loves you. He will forgive you.”  With a teddy bear in one hand and a thumb in her mouth, she walked tentatively to her grandpa. Eyes fixed on her patent leather shoes, she squeaked, “I’m sorry.” He scooped her up in a big hug and told her it was OK.  He told her he loved her as she clung to his neck crying.  She stayed particularly close to him that Christmas.  She probably does not remember this incident except that she has been told the story a million times. I know she will never forget his hugs, his candy drawer, or singing “Splish, Splash”. She will never forget those special Christmas mornings.  She will never forget she was his favorite and he was hers. 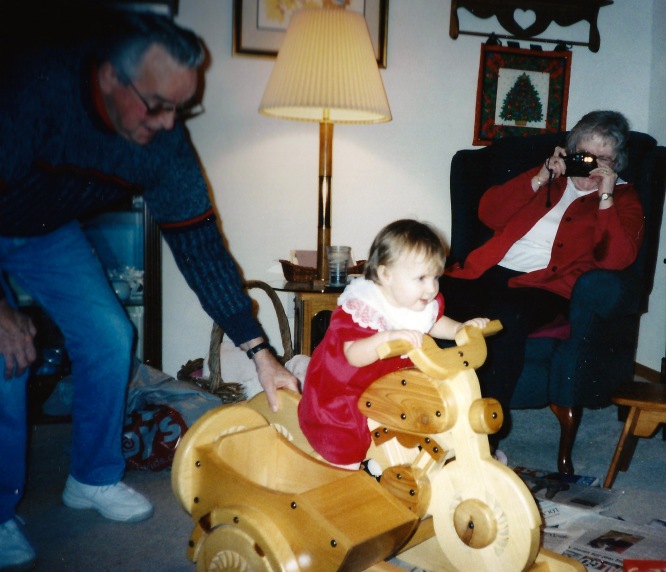 Her First Motorcycle- His Idea!