On a hot day in July in 1984 in Fairbanks, Alaska, I met the man, for the second time, who would become my husband.   I had been baling hay on a Thoroughbred farm just northeast of Fairbanks that day. Fairbanks in the summer is beautiful. It is sunny and light all day. The landscape is breathtaking and teeming with wildlife.   (Actually, it is beautiful year around in Fairbanks, but Mother Nature doesn’t actively try to kill you in the summer.)  I had been sent to town to pick up supplies for a trip to Anchorage.  The farm was shipping a horse to Seattle and picking up a Shire coming in on a barge.  I was going along to share the driving which would be slow on the Parks Highway hauling a horse trailer.

Baling is dusty work and I was covered in it.   I think in any other state, a man would disregard (perhaps even run in the opposite direction of) a woman clad in hay-covered cowboy boots, Levi’s and a t-shirt.  Not so in Alaska. When I saw that red and silver Ford F150 with a chrome package, I stopped to watch it pass. I knew that truck and it was a thing of beauty.  I racked my brain to remember his name. Apparently, I also employed the snapping and pointing technique to aid in remembering, because he stopped when his passenger noticed and informed him that a girl was pointing at him.  (Who knew?! All you have to do is point at a guy!!) He stopped, and I remembered his name. Just one year had passed since I met him in his hometown of Skagway, Alaska, and yet he seemed like a completely different person. Shallow, I know, but he seemed so much more handsome to me.  I think it was the beard and mustache he grew in that year living in Fairbanks.  Such a little thing to change my whole picture of him. He was the same guy- funny, kind, strong, adventurous – just with more hair.

Though I gave him my phone number, I really did not expect him to call.  Remember, I was covered in dust from riding behind the baler and stacking bales.  I probably had horse hooky on my boots and grass in my hair.  It wasn’t my most attractive moment.  But call, he did, and we spent the summer getting to know each other. (I also spent the summer transferring from the University of Georgia to the University of Alaska, but that is another story.) He would come out to the farm after work and hang around as I did the evening feeding. He wasn’t a horse-guy but he liked being outdoors and he liked being with me. So, he learned.  He learned that horses bite. He learned that breeding horses takes many hands especially if you have an 18-month-old Shire stud (the equivalent of a 2000-pound toddler).

On the weekends, he would help me move the mares and foals to the pasture. We talked and learned all of those things you learn when you are first dating someone.  We talked about the big things like our families. We talked about the little things like our favorite colors.  His was purple and so I took to cutting some beautiful purple flowers I found growing wild near the farm.  Every day, I would bring them to him when he came down the road to the farm.  It got to be a thing. I would give him stalks of purple flowers and then a kiss.  I thought they were the most beautiful flowers with their tall stalks swollen with purple buds. In my 18-year-old heart, they were the expression of my growing love for this man.  They were everywhere – on the side of the road, on the edge of the meadow. No work at all, they just grew bold and plump.  One day, I gave him a bouquet and he said to me, “You know those are weeds, right? They’re called Fireweed.” Twenty-year-old guys are often accidentally insensitive.  He was stating a fact.  I was crushed. Weeds?!?  They were so beautiful and, seriously, did he not get it? I was giving him flowers. They were his favorite color.  I am sure my face told the whole story, because he quickly back-peddled and pronounced their beauty despite their obvious lack of pedigree.

The fact is that weeds are just flowers that grow where you don’t want them too.  Sometimes their beauty is missed because they are inconvenient or not what we wanted. Those flowers were beautiful to me. They still are.  As a transplant myself, I didn’t know that they were weeds. I just saw them for what they were- lush, colorful blooms standing tall and proud.  I would have taken a garden of them.  It is a good thing that we did not apply the “weed theory” to each other or we might have missed the last 34 years together.  I certainly looked like a weed standing in the parking lot of the Safeway in Fairbanks Alaska covered in hay dust.  I definitely did not feel like a flower in that moment, but he must have seen a flower. He was the same man I met in Skagway, albeit beardless, but I missed him completely that first time.  I am so glad I got a second chance because he was definitely not a weed.

I found these Lupine growing wild outside of Newhalem and they reminded me of that summer. 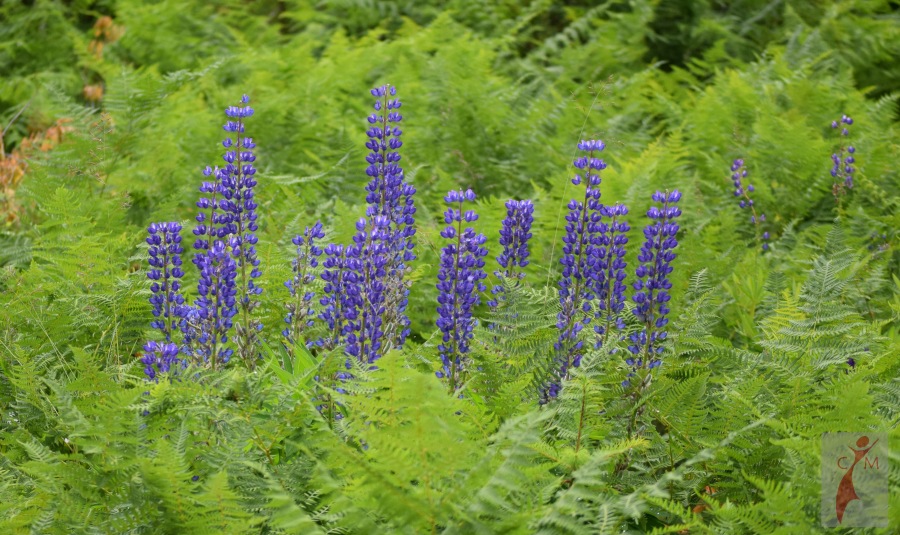 6 thoughts on “Don’t Mistake a Flower for a Weed”