Let me just say at the outset, I know that this story is going to reveal with lights and sirens the unhealthy relationship I have (or had) with my Jeep, Angus.  Yes, I named it. Don’t judge.  We were together for 10 years.  A couple of weeks ago, I wrecked Angus.  It was the one and only snowy workday morning of the winter.  I think snow is the most beautiful type of weather. Snow makes my heart happy. If I know it is going to snow overnight, I hop out of bed extra early in the morning to look out the window hoping for a thick blanket of white powder.   I am cheerful when I get the ‘two hours late’ phone tree call.  When I was teaching, I even made my freshman science students do a snow dance whenever the forecast called for snow.  I convinced them that I had learned the snow dance in Alaska.  (Freshman are gullible and generally willing to do silly things.)

I left my house a little later than normal hoping some of the ice and snow would clear. School was two hours late and my daughter was snuggled up to our two boxers.  She didn’t wake up to say goodbye.  The boxers had the decency to make eye contact but made no effort to move from their revered and toasty spots.  Just as I was leaving, my husband texted me to tell me to avoid the Lowell Rd.  It is a windy road cut in a hillside along the valley and my preferred method of getting to work. He knows how much I love to drive on country roads.  I have put a few icy miles under my wheels.  I went to university in Fairbanks, so I know how to get out of a spin.  I had a lot of practice.  Until this fateful day though, I had never been in an accident.   I was driving well under the speed limit, gearing down as I approached the stop lights.  I gave everyone lots of room.  When I came to a small dip in the road, I hit a massive patch of ice.  You always hear that your life passes before your eyes in these moment.  Time definitely slowed down drawing out those terrifying seconds.  My first thought as my rear axle whipped around behind me was “This is gonna leave a mark.”  I grabbed the gearshift so hard one of my fingernails popped right off my pinky finger. It all happened in slow motion. My glasses flew off my face and hit the windshield. Out of the corner of my eye, I noticed my coffee cup exiting its holder in the console and splashing across the passenger door.  As I traveled across the other lane of traffic, I briefly made eye contact with the wide-eyed driver of an oncoming car. Fortunately, I slid right in front of him. I hopped the curb taking out a fence and landing on a power pole.  I sat there for a moment at a loss of what to do. The glass on the passenger side was shattered and through the gaping hole I could see a little snow-covered lake.  It looked serene and I was so grateful I was not submerged in it.  The 911 operator was very patient with me.  Once she determined I was not hurt, she said “No one is coming for you.  There are just too many injury accidents.”  That should have been my first clue as to just how lucky I was.  I wasn’t hurt.  Not a scratch. I did not hurt anyone else.  But I was rip roaring mad.  I put Angus in 4 low, pulled us off the fence and headed home.  I was standing teary-eyed in the driveway staring at the crushed hard top and dented quarter panel when the wrecker came to tow him away.  Even though my insurance company was unbelievably helpful, I still felt like I wanted to throw a temper tantrum worthy of a nap-deprived three-year-old.  “I don’t want a rental car! I want my Jeep back. Don’t tow Angus away!”  Eventually I got a grip.  That lasted just until a man whose title is “Total Loss Evaluator” called.  (What kind of title is that! Why don’t they just call him the Automotive Grim Reaper?!)  In my defense, everyone kept telling me the Angus could be rebuilt.  It never occurred to me he was never coming home again.  I’m not proud to say it, but it is the truth:  I moped. I whined. I complained. I hate buying cars. Angus was everything I wanted in a Jeep.  I didn’t want to deal with finding a new one.

In the midst of this crisis, my life went on – another clue as to how lucky I was.  I was visiting a school (which I had driven to with great annoyance in the three-bedroom SUV I rented) when I noticed a staff member carrying a very large wheeled back pack, certainly too large for a child to carry. I asked her what it was for as she stacked it among 15 others of the same style.  She told me that the backpacks were filled with food by the staff and a local church for children to take home for their families who had no food on the weekends.  The students were bringing them back that day so that they could be refilled for the next Friday.  It instantly brought tears to my eyes to think of children going a weekend without food. But of course, they do. Not just in my home town but all over this country.  The staff member shared that the children were so thankful every week and that they had a much greater need than they could fill each week.  I felt so ashamed to have made such a production about a Jeep.   I wasn’t hurt. I did not hurt anyone else. I had insurance.  I could afford to buy a new Jeep.  While I was standing in my driveway in the snow staring at my totaled Jeep, there was a child waiting to pick up a backpack of food for his or her family.  My dad would have told me to ‘rub some dirt on it, suck it up and do the right thing’. He would have been right.  I should have spent my outrage on something that really mattered like kids who have real needs they have no control over.  There are so many needs in our communities. None of us can do everything. But each of us can do something.  I bet your local school has a program like this one.

The photograph below was taken in 2011 in Kilmainham Gaol in Dublin.  When I visited, there was a group of the grandchilden (though hardly children – quite old themselves in 2011) of the men executed for their part in the Easter Rising. Just being in this place, I felt the full force of the sadness and suffering these walls held. 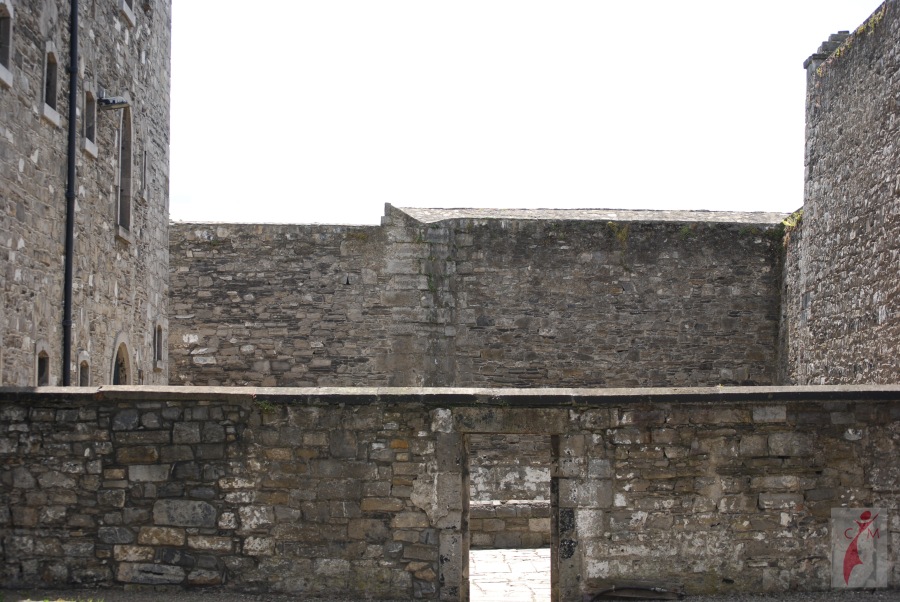