As I was driving home from work tonight, Corey Hart’s Never Surrender came on. You probably will only know this song if you were embroiled in teenage angst or young adult drama in the mid-1980s. It was the theme song for that.   I remember it because I recorded it on cassette tape and sent it to my best friend, naively hoping it might help to wake her up.  In the fall of 1984, I was sitting in a small lecture hall at the University of Alaska Fairbanks furiously scribbling every word Dr. Lokken uttered in CHEM101. He was brilliant, in my opinion, and never looked at a single one of his notes (if he even had any) as he lectured his way through the periodic table.  The first day of class, I was sitting in the front row with my brand new spiral binder eclipsing the tiny fold out desk.  I had the 20 lb Introduction to Chemistry book in my lap.  It was either over-confidence or complete ignorance that led me to think I could listen, take notes, and look something up in that book all at the same time.  But there I was, blue ballpoint in hand, writing at warp speed.  What can I say? It’s how I learn. I have to write it or draw it for it to sink in – whatever it is.  To this day, I do this- scribbling charts and diagrams, sketching arrows showing relationships, capturing important words or phrases, using shorthand to remind me of key ideas.  In the end, it is truly a mess.  There is blue ink everywhere. Circles and boxes and symbols fill the page and I choose to think of that as evidence of brilliant ideas instead of the more likely disordered mind.  Only I can fathom what I mean when I am scribbling my notes. On this particular day, my flamboyant style of note taking caught the eye of the woman sitting next to me. She was a curly-haired, doe-eyed freshman who I noticed, when Dr. Lokken finally took a breath, was staring at my notes mouth agape.  When my eyes hit hers, she uttered, “Wow, how do you even read that?” I was stunned, as you can well imagine, not that she would think it was indecipherable, but that she would have the audacity to say it to my face.  Fortunately, I was saved from having to respond when Dr. Lokken, lungs refilled, resumed his lecture.  As soon as class was over, I scooped everything up, shoved it quickly in my back pack and scurried out the door- mortified.  I mentally memorized her face and vowed to sit in the back during the next class.

Day two of CHEM101 came quickly and I had nearly forgotten about the incident.  I was also powerless to sit in the back row. I couldn’t do it. I love school. I am compelled to sit in the front, rapt in learning. Sadly, there was a seat open next to me when, of course, she walked in. She walked right up to me. Honestly, I was shocked. She was just a little thing. Clearly not tough at all. I pictured her in high school maybe on the dance team or key club helping people and generally spreading joy. I just did not know why she was being so confrontational.  Clearly, I misread her joyful aura because there she stood digging in her backpack from which she pulled out a bag with a UAF Nanook emblazoned on the side. She handed me the bag. I instantly felt really bad. I had definitely misjudged her and here she was making a peace offering.  And then I opened the bag. My jaw dropped.  Inside the bag was a mechanical pencil, extra lead and an oversized eraser.  I could not believe it. I was speechless. I just stared at her. I mean really, who does that?! Who criticizes a complete stranger and then twists the knife by purchasing the solution to the problem they painfully exposed?  In that space, while I was trying to find just the right words to tell her to sit somewhere else, she uttered, in just the kind and joyful voice I imagined she would have, an apology.  She told me she was sorry that she insulted me by being insensitive and, though she really didn’t want to hurt my feelings any more than she already had, she really thought I needed a pencil.  Zing! I am sorry, and you are still a mess – please use a pencil and eraser.  Ouch! But she quickly introduced herself in great and rapid detail, while unpacking her neatly organized materials.  I felt like I was observing a tornado in reverse.  It was quite extraordinary really.  She swept me up as she rattled along and by the time class started I found myself chuckling inwardly.  She was a pretty likeable person- cheerleader not dance team but definitely a natural at spreading joy.  (She was right about the mechanical pencil by the way and I still use them almost exclusively.)  From that day, we became fast friends.  It was an unusual friendship because we were different in as many ways as we were alike.  She lived in the same small town her whole life. I moved around a lot as a kid. Her family was simple and consistent. Mine was complicated and flexible.  She was an artist. I was a scientist.  We both loved the Pink Panther, country music, and the wilderness. As with most enduring friendships, our differences led to a deeper appreciation of each other and of ourselves.  It feels good to connect with people as much when it is a single string that we share in common as it is when there is a whole web.  People are meant to connect, to find commonality and reconcile differences.  Our friendship continued through the school year.  We passed CHEM101 and I convinced her to sign up for Organic Chemistry.  She bought the textbook before school was out because she was convinced that she would bail if she didn’t invest in the course.  Our friendship weathered sub-zero temperatures and near constant darkness. We found time for each other even when distracted by boys or overwhelmed with homework. They were both a big distraction back then.  She tried to teach me to ride a motorcycle that summer.  It wasn’t my thing. That was one of the best things about our friendship.  Our differences didn’t matter.

As we were preparing to go back to school in the fall, she decided to take a short  trip with her brother and some friends to Anchorage.  On the way down, she and her brother were hit by drunk driver outside of Palmer.  Her brother died at the scene, but she made it to the hospital albeit unconscious.  Back then, it was easier to get information.  There was a very kind nurse who seemed as concerned about her patient as she was about her patient’s friend hundreds of miles away.  The nurse was hopeful but realistic and told me to send a tape of me talking to her or playing some music.  She said it was possible my friend might hear me and that could stimulate her.  I sent her a long and silly tape that ended with Corey Hart singing Never Surrender.  It didn’t wake her up.  She was the first person around my age to die who I knew.  I was devastated. Although I did all the healing things you do, like planning a memorial and just being with our friends and family, I was not healing. I could not fathom the unfathomable- how a beautiful, kind, joyful tornado could die at 19 at the hands of a careless drunk driver.  Death seemed so unpredictable – as of course it is.  As I write this, even 37 years later, I am weeping for the loss of her and all that she could have been. Would she be married and have a child as I do?  Would she have been an artist or nailed Organic Chemistry? Whose lives might she have touched?  Pointless questions really but haunting ones nonetheless.  I am reminded this week that there are so many ways the light of a young person (or an old one) can be extinguished that we can do nothing about. But there are many, many more that we can.  For years, I spoke on a panel for new drivers about the real impact drunk driving has on not just the victim but the survivors. It was a small thing. I cannot know with any certainty I made a difference. But it was something. And we have to do something, I think. Right now, we have to do something. 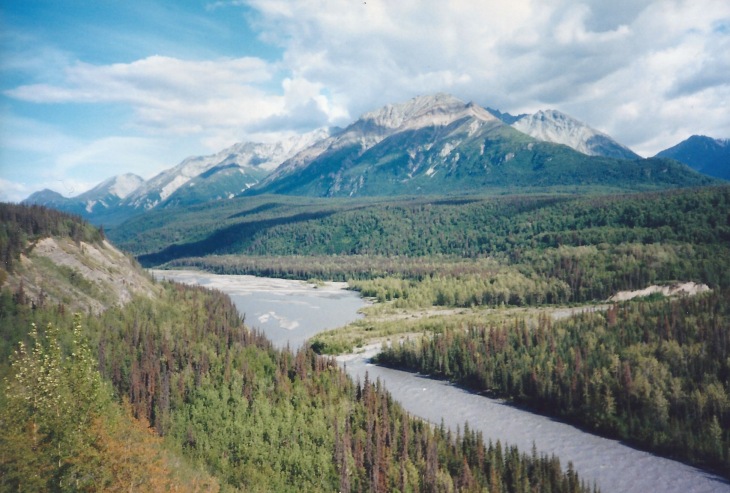 Going Home
This photograph was taken in 1999 (pre-digital) on a trip to my friend’s childhood home outside of Glen Allen, Alaska. Alaska defines beauty to me. It wasn’t the same without her.

Catherine Matthews is an educator and author living north of Seattle. She is currently at work on her debut novel, Becoming Benny. Catherine shares her life experiences on her blog, Life Through My Lens. As an educator, leader, parent and human being, Catherine shares her adventures in child-raising and teaching, as well as the childhood stories that shaped and molded her. She, like all of us, searches for meaning in the mundane, contemplating the lessons she’s learned along her journey in life. Whether it’s recollecting the follies of her youth, remembering those who have come and gone, or simply musing about life, she is drawn to share rich and vivid stories that will make you laugh, cry and maybe even learn. Carefully weaving photos into her tales, she paints a picture of life that often acts as a mirror into our own. View all posts by Catherine Matthews