If you are reading this, there is a good possibility you are an adult.  I know you have responsibilities and obligations.  Maybe, when you hear that forecast for snow on the evening news, you get a sinking feeling.  You imagine slogging to work at 25 miles an hour praying you won’t slide into the ditch while keeping one vigilant eye on the three-bedroom SUV riding your bumper. You imagine braving the local grocery store only to find the last carton of eggs being scooped up in a mob-induced frenzy rivaled only by doomsday preppers on the eve of the Zombie Apocalypse.   You worry about finding someone who can watch the kids if you have to go to work. Knowing this, I am aware that what I am about to say is controversial, but I am going to say it anyway.  I love snow.  I do. There, I said it. I am owning it.  Now admittedly, I don’t love to drive in it much anymore, especially after losing my beloved Angus last winter.  And I have the luxury of having some vacation time saved up for just this kind of a situation, so I can stay home. But even when I had to get up an hour early, don my Sorrels and a parka, and trek 50 miles past 4 school districts that wisely closed due to snow just to get to my job in the foothills on time, I still loved the snow.  I love the fat flakes drifting slowly to the earth.  I love the heavy drifts building on evergreen limbs. I love the quiet calm that a blanket of snow brings to an early morning. 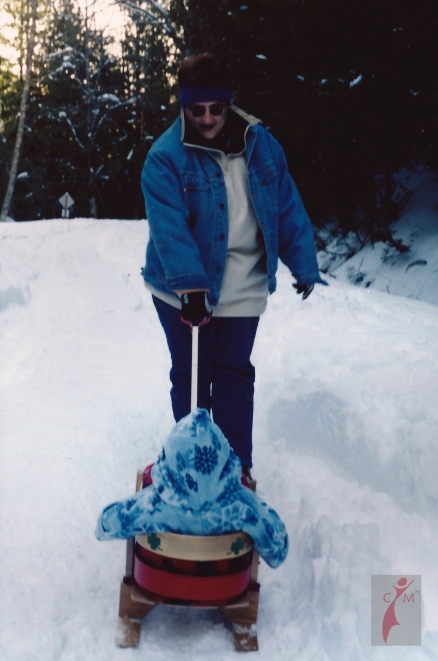 Most of all I love those two joyous words: Snow Day!  I probably shouldn’t broadcast this (although literally hundreds of current adults, once-students, know already) but when I was a teacher and I knew snow was coming I would convince my students to do the Alaskan Snow Dance at the end of class.  I told them it was something I learned while living in Fairbanks. What can I say?  Freshmen are gullible – and fun!  It was silly. I only did it when there was a better than 50% chance of snow because, after all, reputation matters. I knew I had to deliver if I was ever going to get them to do the dance and chant “Snow, Snow, Snow” again. 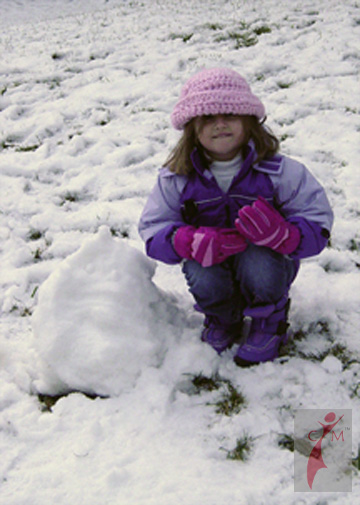 Just like everything else, snow days bring back great memories.  When I was little, my dad had this enormous toboggan.  It would practically hold the whole family – no small feat if you are an Irish Catholic family.  We would bundle up in layers beneath our winter coats.  Donning our boots, hats and mittens, we would make the frosty trek two blocks to the nearest side street hill.  It was a long walk when your joints barely flexed beneath the layers of wool.  Three little Stay Puft Marshmallow girls trailing behind our brawny dad as he dragged a path through the snow for us. I remember I always tried to walk in his footsteps.  I would swing the whole side of my body forward trying to land my foot exactly where he stepped. Invariably I would fall behind as my sisters tired of my Frankenstein pace.  When we arrived at the hill, he would place the toboggan in the center of the road and take his place in the very front where the wood curved up and back like a sleigh.  Grabbing the rope that allegedly steered the sled, he would shout, “Jump on and hold on tight.”  With a couple bumps of his seat, he would launch us down the hill. We would hold each other by the waist, shrieking as we flew through the snow.  At the bottom, we would fall off the sled into the snow drifts giggling.  Then we were back up the hill as fast as our little legs could carry us, slip-sliding all the way.  We would go up and down that hill all morning until we were soaked and frozen.  I would be so sad when the sun would come out and the snow would begin to melt.

It was even more fun to have a snow day when my daughter was little.  The first time she encountered snow, she was only a year old.  I bundled her up like the Michelin Man and took her out to play.  My father gave her a sled that Christmas and she giggled her way around the neighborhood shouting. “Again, again, again!” In the way only small children, who are just discovering their world can, she plopped in the snow and rolled around, lifting it in armfuls aloft and letting the snow fall all around her. She searched the sky with her tongue out, trying to catch the flakes.  She tossed it to her dogs as they bounced through the drifts.  That was just the beginning. As she grew, she would search the refrigerator for just the right vegetables to top off her snowmen. She would slide down the lawn with her best friend on flimsy sheets of plastic, collapsing together in raucous laughter as little girls do. Afterwards, wet clothes discarded for PJs, we would snuggle by the fire with cocoa and a movie.  Bliss. 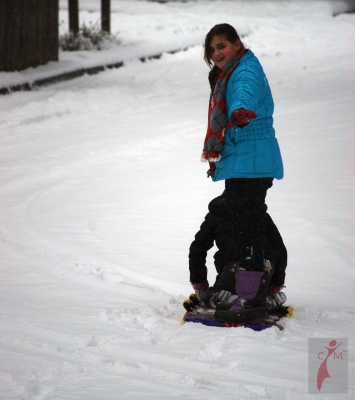 At our house now, we have our own pre-Snow Day ritual.  My daughter insists, even if there is a 100% chance of a 10-inch snowfall, that we get ready for bed as we always do. We make our lunches.  We go to bed at the normal time. We set our clothes out.  We wake up at the normal time. She is convinced, and I agree, that we must not anger the snow gods, or we won’t even get a late start let alone that mystical unicorn- the Snow Day.  Last week, we had two snow days.  It was a mess, I know, for many people.  The roads were terrible, and I did not want to drive unless I really had to. I realized that our snow days together are numbered.  I am glad I have had all of those snow days with her.  I know, after this, her snow days will be hundreds of miles away from mine. The snow won’t bring a spontaneous pajama day with popovers, cocoa and silly movies.   So, I took two vacation days and spent them with my husband and daughter. We didn’t go sledding but we enjoyed the snow, nonetheless.  We watched movies and talked. We played games. There was none of the usual hurrying to get everywhere and do everything on time.  There were no distractions – just making a few more warm memories on a cold day.

7 thoughts on “Snow Days: Sometimes the warmest memories are made on the coldest days!”

MENTORING MONDAY: Your mentee doesn’t know what they don’t know.
Finally! Top down weather in the PNW!